The original intent of the Voyage National Program was to replicate and permanently install the Voyage exhibition on the National Mall – the Voyage Mark I Exhibition – in communities across the U.S. The extended vision was to translate the storyboards into other languages, allowing installation in 100 communities world-wide, given that the nature of our existence knows no national boundaries.

Designing the exhibition for placement on the National Mall required adherence to the ‘Mall aesthetic’ defined by the 1902 McMillan Plan written by the U.S. Senate Park Commission, and enforced today by the U.S. Commission of Fine Arts and the National Capital Planning Commission. The resulting sculptural design approved by the Commissions required incorporation of unique custom elements and use of unique materials, which meant that the cost of a replica was expensive – a baseline cost of $180,000. The cost unfortunately limited access to larger organizations capable of raising significant funding. The Voyage Mark I exhibition was indeed replicated and permanently installed at 3 sites in 2008-09:

After the financial crisis in 2007-2008, seven additional sites in the midst of fundraising, including the Iowa State Capitol Grounds in Des Moines, and Liberty State Park in New Jersey, terminated the project. The result was that only four Voyage Mark I exhibitions were produced and installed.

The Mark I exhibition remains available for purchase and installation in communities across the U.S. and Canada. 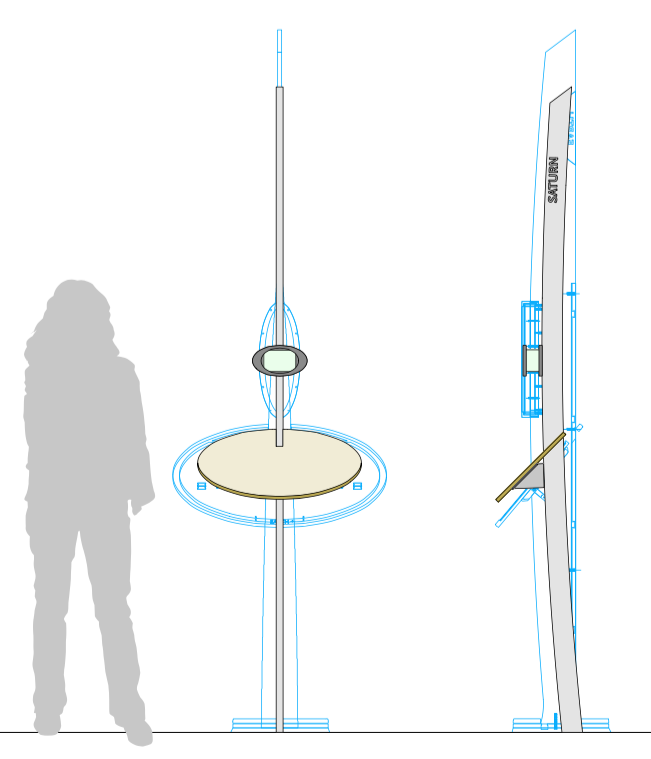 The new low cost Voyage Mark II Exhibition is shown against a silhouette (in blue) of the Voyage Mark 1 Exhibition, © 2019 NCESSE. Click on the image to zoom

In 2018, the National Center for Earth and Space Science Education re-assessed if the original goal of the Voyage National Program could be realized. This would require a new low cost exhibition design that would still maintain the basic look-and-feel of the Voyage Mark I. But the new design would not require the unique custom elements that made the Mark I so expensive. Economies of scale could also be realized if multiple exhibitions were fabricated at once.

The result was the Voyage Mark II Exhibition, which preserves the full visitor experience of the Voyage Mark I and reflects the heritage of Voyage on the National Mall. But at a cost of $37,500, the Mark II  is just 1/5th the cost of the Mark I. In addition, the National Center for Earth and Space Science Education will provide significant fundraising assistance, on a case-by-case basis, for communities working to install a Mark II exhibition.

The Voyage Mark II preserves the original laser-sculpted execution of the 3-dimensional worlds in solid crystal, but in a smaller off-the-shelf crystal block rather than the massive custom crystal ellipse of the Mark I; preserves the high resolution full color storyboards but uses high pressure laminate panels, which are employed for outdoor use by, e.g., the National Park Service, instead of the porcelain enamel used in the Mark I; and the stanchions, while more slender, are also made of anodized aluminum and retain the arched aerodynamic shape of the Mark I.

Click on the image above to see a comparison of the Mark I and Mark II profiles. 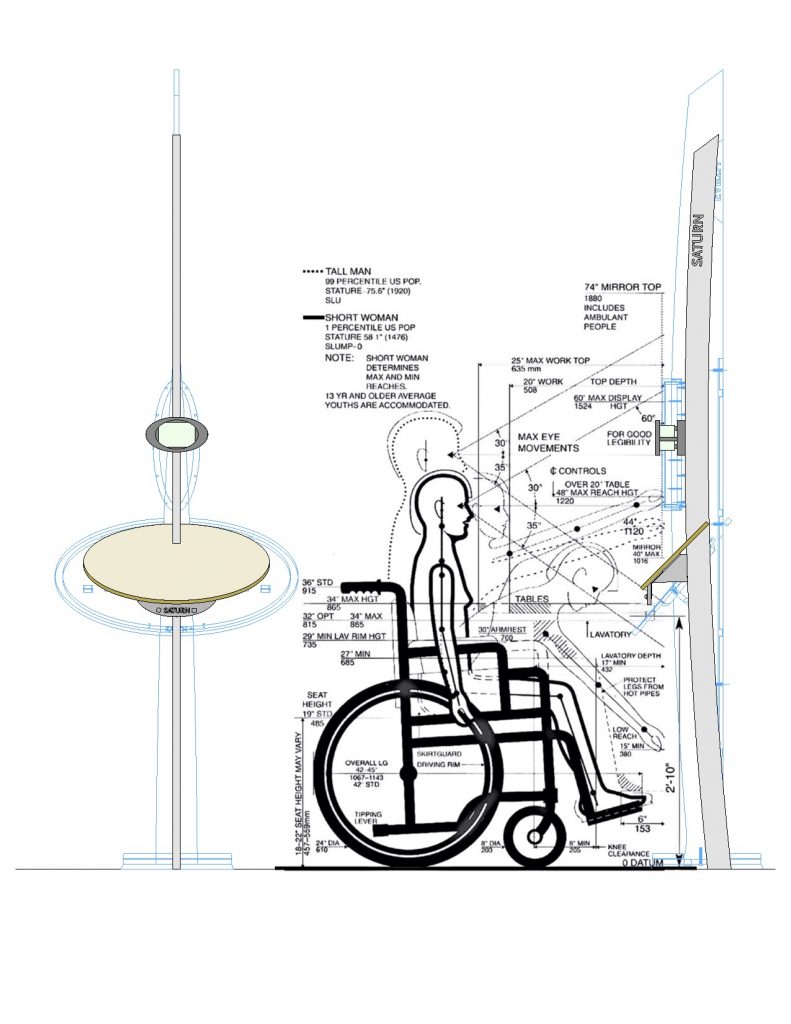 Wheelchair accessibility for both Mark I and Mark II Exhibitions. Click on the image to zoom

Both the Voyage Mark I and Mark II exhibitions are ADA compliant, and offer a rich visitor experience for visitors with disabilities. The exhibitions are designed for wheelchair access, and include tactile elements for the blind and vision impaired.

Tactile Elements
Stanchions for both exhibitions include the name of the planet in raised block lettering, and a tactile hemisphere of the planet at the 1 to 10-billion scale. This provides visitors a tactile model solar system. These tactile elements are located at the front of the storyboard so that they are easily accessible to children and a visitor in a wheelchair. The Voyage exhibitions also include a raised QR (Quick Response) code co-located with the other tactile elements. QR codes are used by the blind or vision impaired to access information otherwise not easily available to them (see. e.g., this article from the American Foundation for the Blind). When scanned by a smartphone, an audio file will open on the phone where a narrator will read the complete storyboard to the visitor. The Voyage Mark II tactile elements for Jupiter can be seen in the image below.

Note that there is no Braille employed given that the majority of the blind and vision impaired do not read Braille (see, e.g., The Braille Literacy Crisis in America). The name of the planet is in raised 5/8-inch tall capital lettering (block lettering), which is easily read tactilely by virtually any visitor by just sliding one’s finger across the top of the lettering.

Explore a Voyage Exhibition for Your Community

Read about the available exhibitions, and how you can explore installation of a Voyage in your community on the following pages:

Subscribe to receive email updates from the Voyage Blog and Voyage Program Director. NOTE: You will receive an email with a link to confirm any subscription or unsubscribe request. This link must be clicked in order to complete the request.