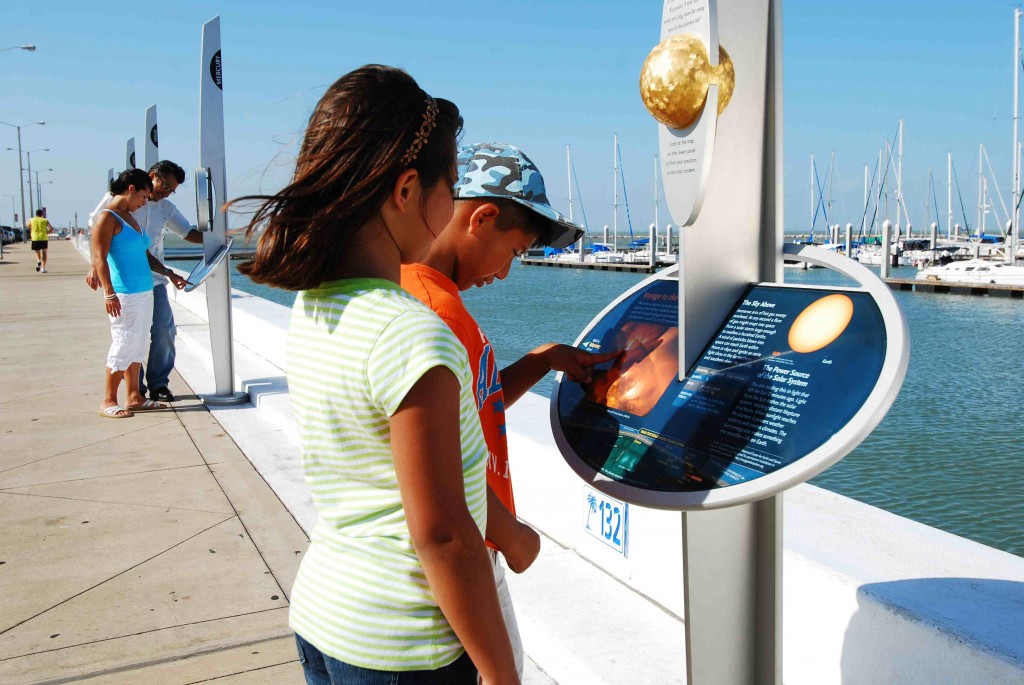 The task before the Voyage exhibition design team was to construct a physical model of the planetary domain of the Solar System extending from the Sun to Pluto. At the time, Pluto was still designated a planet. Note to Pluto – we still love you. The Voyage exhibitions still include Pluto given its historical status, and its storyboard is where the nature of Trans-Neptunian Objects and dwarf planets – important topics for an understanding of the Solar System – are addressed.

The Problem with Modeling the Solar System

Regardless of the true size of what’s being represented by a physical model, whether it’s a model of the Earth, an airplane, a cell, or the structure of DNA, a physical model is usually constructed at a size that maximizes a person’s ability to hold it and manipulate it, so they can learn about – in fact explore – the real thing being depicted by the model. The size of a physical model is therefore more reflective of the size of a human being rather than what is being modeled. In this context, a reasonable size might be 0.3 meters (1 foot) across, about the size of a typical classroom globe.

The Solar System, however, poses a problem for the model builder. The Solar System is comprised of small objects in a vast space. Even the Sun is dwarfed by the space. You would need over 4,200 Suns side-by-side to span the distance between the Sun and Pluto. The fundamental problem is representing the objects and the spaces between them on the same scale.

Consider the two extremes for the model builder. First, consider a model of the Sun-Pluto distance that is constructed about the size of a classroom globe, or equivalently, drawn on a sheet of 8.5” x 11” paper. On the paper you could locate the positions of the Sun, all the planets, and Pluto—creating a comfortably sized model of the Solar System. But on this scale the model Sun would be barely visible, with a diameter less than 0.1 mm across, and the planets would be too small to be seen. The Washington, DC, site map below, when viewed on your computer screen is a great example. It can only provide the locations of Sun and planets as dots.

On the other extreme, if a model of a 1,000 km diameter moon was constructed about the size of a classroom globe, then the model Sun-Pluto distance would stretch the length of the U.S. pacific coast, and the model Sun would be as tall as the Empire State Building in New York.

Given the nature of the Solar System, the compromise approach for Voyage was to use a scale where the size of a human being is about mid-way between the smallest object depicted and the largest distance depicted. This is the most effective way a human observer can experience the Solar System as a model. It maximizes the visitor’s ability to directly observe both the sizes of the worlds and the distances between them—at the same time. 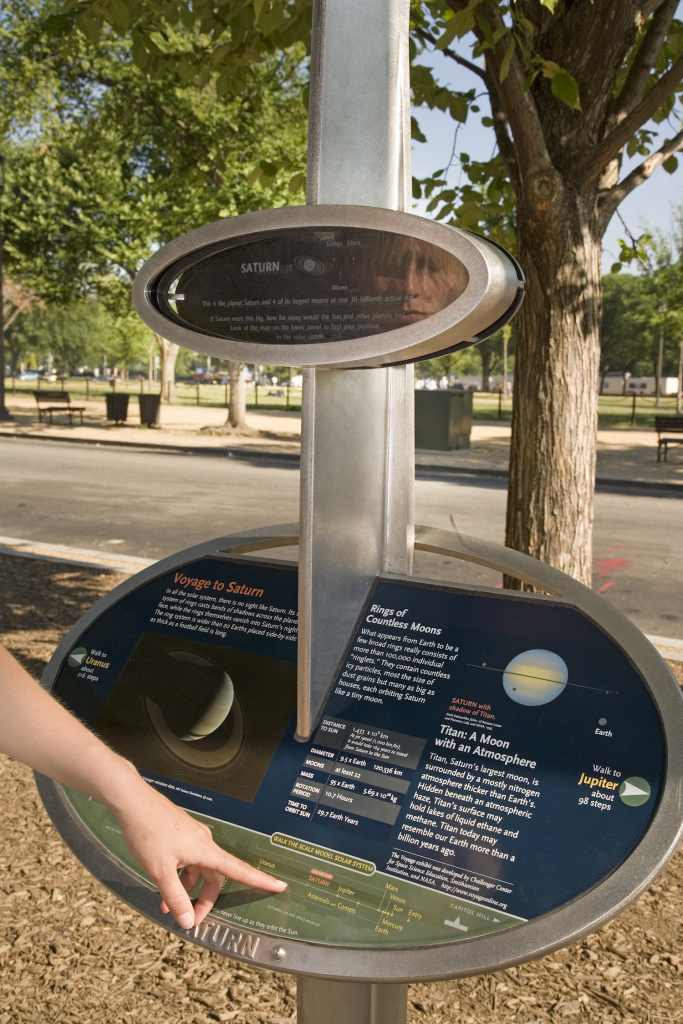 The model Saturn together with four of its moons at the 1 to 10-billion scale in Washington, DC. (click on image for more details) Credit: ©Smithsonian Institution, Eric Long

A scale of 1 to 10-billion works perfectly, and as a power of ten, also allows easy calculation of model sizes. It is also conducive to developing lessons that address math skills.

At the 1 to 10-billion scale everything is reduced in size by a factor of ten billion. A model of a 1,000 km diameter moon is 0.1 mm across and still visible to the human eye. A model of the 6 billion km Sun-Pluto distance is a 600-meter path, or a comfortable 10-minute walk.

As a scale model Solar System, Voyage was also designed to a minimum pedagogical requirement. Standing in front of any model world, a visitor must be able to easily see the location of the next world. The idea is that a visitor should always be able to directly compare the size of a world in front off them to the distance to the next. This provides instant recognition of a tiny world in a vast space, which was the central learning objective of the exhibition. It is in fact the whole reason for the exhibition’s existence. 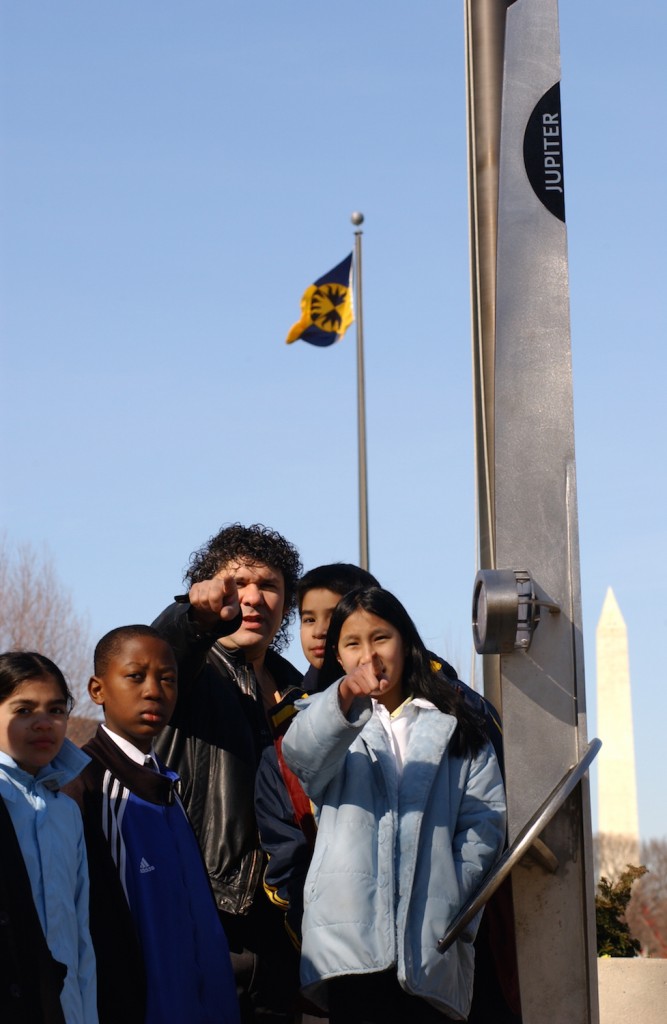 In Washington, DC, a class tour at the Jupiter stanchion looking back to the Sun and inner Solar System. (click on image for more details) Credit: NASA/Renée Bouchard

At the 1 to 10-billion scale this constraint is easily satisfied even in Voyage’s outer Solar System where the planets are much farther apart. In addition, the Voyage Mark I stanchion height of 8.5 feet (2.6 m) was obtained from computer modeling meant to ensure that the stanchion is visible at a distance even if an intervening crowd of people is close to the visitor.

Voyage actually does far better than the minimum requirement as long as there is a clear line of site. For example, in Washington, DC, from the model Uranus, you not only can see all the way back to the 8.5-foot tall Sun stanchion, but easily see the model Sun glistening in the distance.