Most visitors to a Voyage exhibition are unaware of the level of accuracy of this model Solar System. For those readers with a deeper understanding of apparent motions in Earth’s sky, and for Earth and space science teachers, here is the rest of the Voyage.

Laser-Sculpting the Model Planets in 3D Inside Crystal Block 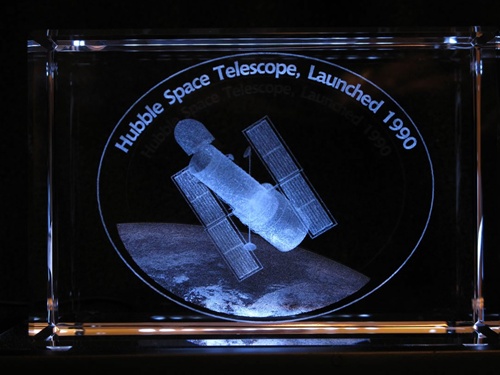 The Voyage exhibition design constraints required physical models to depict the planets, the dwarf planet Pluto, and moons with a diameter of 1,000 km (600 miles) or greater on the 1 to 10-billion scale. On this scale a 1,000 km diameter moon would be just 0.1 mm in diameter, which would just be visible to the unaided eye for a visitor standing in front of the exhibition. The higher level objective was to create models that could accurately portray the ring systems for the gas giant planets, and the correct orientation in space of a planet and its moons’ orbital planes. Multiple modeling techniques were explored, but only one provided the fidelity and visual impact required.

Integrated into each of 9 Voyage stanchions—for Mercury, Venus, Earth, Mars, Jupiter, Saturn, Uranus, Neptune, and Pluto—is a solid crystal block containing the planet (or dwarf planet in Pluto’s case) together with its large moons. The model planets and moons are created through 3-dimensional (3D) laser sculpting inside the crystal. The technique uses a laser to precisely focus energy at a specific location inside a flawless solid glass block—termed ‘optical crystal’. The result is an extremely small spherical fracture at the point of focus. Each fracture is a pixel—a ‘picture element’ akin to the pixels that make up a 2-dimensional digital image. But in this case, the computer-guided laser can create 3-dimensional structures of significant complexity, fully inside the glass block, and constructed one pixel at a time.

As an illustration of this technique, consider the Voyage crystal line that was commissioned for the Voyage National Program. To allow Voyage communities to generate some ongoing revenue to support their exhibition, a line of crystal products was created that could be sold at their local gift store or museum shop. This included spectacular 3D laser-sculpted crystal for the Hubble Space Telescope above Earth, the Curiosity Rover on Mars, the Gemini Telescope on Mauna Kea, the Voyager 2 spacecraft flyby of Neptune in 1989, and the Apollo 11 Lunar Module Eagle on the Moon in 1969—a set of specific scenes chosen to reflect both human and robotic exploration of the Solar System and beyond. The Hubble Space Telescope crystal is seen above. (You can explore all the Voyage crystals at Store Galactica.)

Using this technique we had the ability to create spherical model planets and moons of highly accurate size; place moons in their appropriate orbital planes and at the correct distances from their parent planet; and reproduce the ring systems of the gas giant planets Jupiter, Saturn, Uranus, and Neptune, including accurate ring width and position of ring divisions. In the case of Jupiter and Saturn, their equatorial diameters are noticeably greater than their pole-to-pole diameters and this ‘oblateness’ could also be accurately portrayed through laser sculpting. Even storm systems—the Great Red Spot on Jupiter and the Great Dark Spot on Neptune, as well as the cloud-top bands of belts and zones on Jupiter, Saturn, and Neptune are accurately recreated.

For a given planet, its shape, ring system, and moons in their orbits, are all structures that are oriented in a well-defined manner relative to the planet’s equatorial plane and spin axis. CAD files containing these data, and formatted for this laser-sculpting technique, were provided to the computer driving the laser to generate all the worlds of Voyage contained in the exhibition’s 9 crystals.

In fact, as part of the Voyage crystal line, we commissioned two pieces called Worlds of the Solar System where the Voyage worlds were all placed in a single crystal block, and in the same detail as provided in the exhibition, so that visitors could take the Voyage home. The first of these two pieces included the 8 Voyage planets and dwarf planets Pluto and Eris. (Note that Eris is only found in Voyage in Kansas City, where the Kauffman Foundation commissioned a unique Eris stanchion for the city.) The small crystal is seen in the photograph below at left, and provides a good visual reference for the Voyage exhibition model worlds. The art from which this crystal was generated, showing views from the front and the top of the crystal, is seen in the image below at right. The second, larger commissioned Worlds of the Solar System crystal includes all 25 worlds depicted in Voyage, and sculpted in size order from massive Jupiter down to Saturn’s moon Tethys. 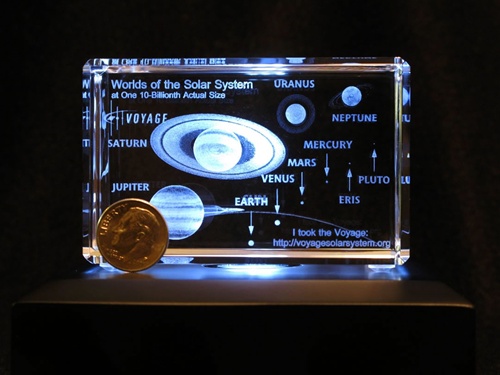 Voyage’s 8 model planets, and dwarf planets Pluto and Eris, in a single crystal block at the 1 to 10-billion scale. The limb of the Sun is also visible at the bottom of the crystal. 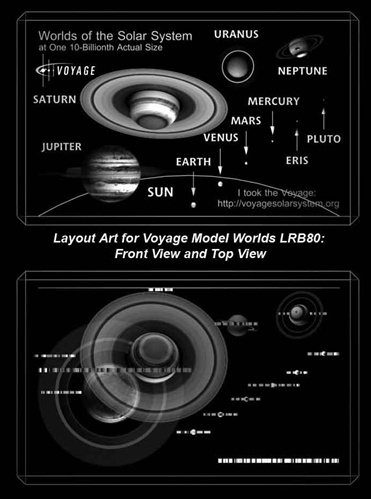 The next level of accuracy, which was to be implemented for Voyage on the National Mall in Washington, DC, was to correctly orient the planet’s spin axis in space, relative to the spin axes of the other planets. We wanted the Voyage on the Mall to provide an experience as close as possible to visitor as cosmic giant wandering through the real Solar System.

But how were we going to define the orientation of the planetary spin axes relative to each other? 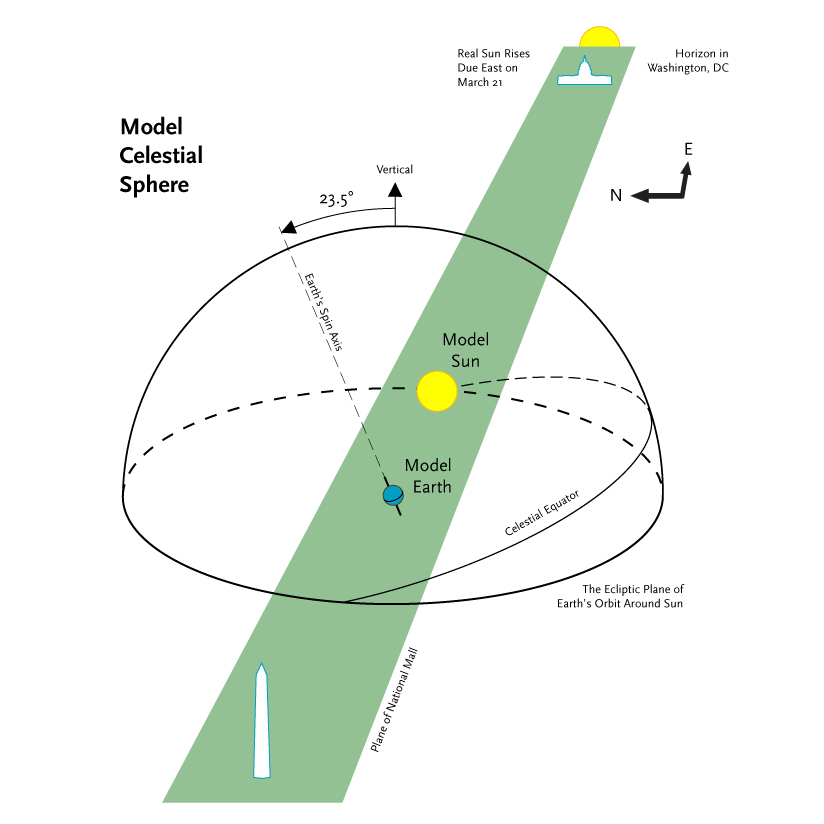 A model celestial sphere positioned relative to the National Mall. (click on image for more details)

The solution was to first adopt the horizontal plane of the National Mall as the plane of the Earth’s orbit around the Sun, known as the ecliptic plane. The Earth spins on an axis that is tipped 66.5 degrees to that plane (tipped 23.5 degrees from vertical). The spin axis maintains a fixed orientation in space as Earth orbits the Sun. This is the case for all the planets, though the orientation in space of each spin axis is different.

To fully define the model celestial sphere, given that the plane of the Mall is the ecliptic, one only needs to specify that the model Earth’s location represents a particular time in its orbit around the model Sun. The moment in time that is chosen is the date of the Vernal Equinox, near March 21.

The reason for the choice derives from the orientation of the National Mall. The exhibition is placed along Jefferson Drive, which runs precisely east-west. The model Earth is located 15 meters due west of the model Sun. At the time of the Vernal Equinox near March 21, when standing at the model Earth, the real Sun rises due east—directly behind the model Sun, and both Suns appear to be the same angular size.

The positions of the model Earth and Sun therefore reflect the time of the Vernal Equinox, the orientation of the celestial sphere is fixed, and the planetary ring systems, planetary oblateness, and position of moons can all be accurately portrayed.

The sizes, orientations, and oblateness associated with the Voyage model planets are shown in the illustration. You see crystalline, 3-D versions of these images, together with moons where appropriate, when looking through the glass of the Voyage planetary stanchions.

It’s obvious that Jupiter spins on an almost vertical axis as it orbits the Sun, with the rings seen edge-on. Uranus spins on an axis nearly horizontal as can be seen from the orientation of its ring plane.

But the Planets Never Line Up

The only significant liberty taken in the Voyage exhibition is that the other planets are also placed along the Earth-Sun line, so the visitor can get an accurate understanding of the relative distances of the planets from the Sun. But the planets never line up, which is stated on every storyboard.

A computer model of the Solar System was developed to test the assumption that the planets are never aligned. In the computer model, planets were initially placed in their orbits at random locations, the clock was started, and the planets proceeded to orbit the Sun. Over the course of four billion years, the planets were never seen to line up in any reasonable interpretation of ‘aligned’.