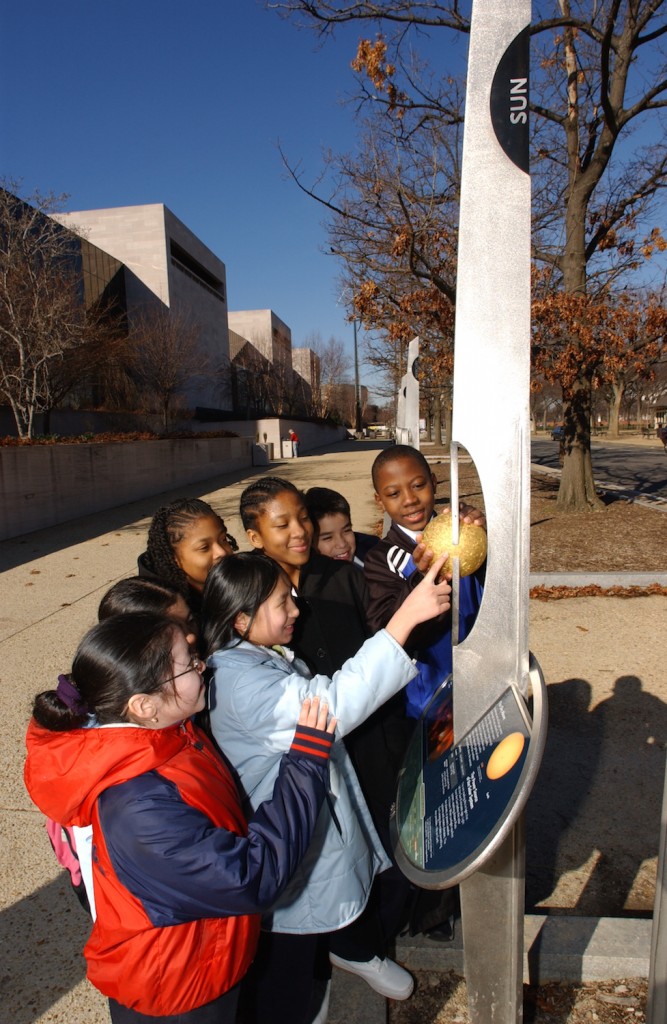 Voyage on the National Mall, Washington, DC. A middle school class at the model Sun. Photo-Credit: NASA/Renée Bouchard.  Click on the image to zoom

Science Education and Models
In science education, the content is often so removed from everyday experience that the learner struggles to truly comprehend. It leads to the greatest mistake in science education, which is to simply teach the jargon, and encourage rote memorization of the concepts. It is the educational path of least resistance. It is tantamount to teaching an elegant book of knowledge in a manner that is as incomprehensible as learning the vocabulary for a new language without any translation to your native tongue.

To the researcher, however, concepts are meant to be understood at an emotional level. To the researcher, a concept is an intimate friend that is ready to assist with an understanding of some new and exciting phenomenon. And the researcher’s deep familiarity with that concept allows him/her to reshape it and apply it in bold new ways.

The second greatest mistake in science education is to teach the book of knowledge in isolation from the process of scientific inquiry, or with process itself defined as a recipe to memorize. The scientific method becomes at most a standardized list of bullets to follow, as opposed to the uniquely personal approach a researcher—or student—must bring to the problem at hand.

The third greatest mistake is to deny the student ownership in the process, and his/her ability to create new content (at least new content to them) through that process. The educator that hands the procedures to their students at the beginning of the class ensures that science will not be done that day. No researcher receives, though divine intervention, the procedures for their experiment, nor do they seek it.

Science education is often conducted in stark contrast to the realities of science, which is fundamentally an emotional, very personal human endeavor that is far more about the journey than the facts. And it’s models that enable this journey.

Models can go a long way in correcting the mistakes of science education. Models allow the educator to teach the book of knowledge in a way that elicits in the student an emotional response to new understanding. (See, for instance, the examples of physical, conceptual, and numerical models we use for the Voyage Scale Model Solar System exhibition).

The educator must also model good process skills. And students must be taught rules of good modeling to take ownership in process. The scientific method is a process model for how to explore within the manifold of science. It is unfortunate that it is often taught as rigid doctrine, rather than something that can be wonderfully shaped by the student.

In fact science education in the classroom should also serve as a model of science in the research laboratory.

The Realities of Science and the Importance of Models

Science is an art, and researchers are artists. Fundamental to science research is the explorer’s ability to ask questions, frame a pathway to an answer, and interpret what they find. This requires a deep understanding of core knowledge, which includes both core factual information and key concepts. It also requires an artists approach to critical thinking, where finely honed skills over time allow you to see a possible pathway from question to answer through the complex noise of the universe around us. This describes a process by which we can explore—giving rise to new knowledge. It is the application of this process by the scientist or engineer that is the art.

Absolutely fundamental to an understanding of: core factual information and key concepts; the means to frame a possible pathway to an answer; and interpreting what one has found, is finding ways to relate this core knowledge, process, and new knowledge to what is familiar. That is the function of models, and there are many different flavors of them. Put another way—models are arguably the most powerful tools in an explorer’s toolbox.

Modeling as an Outgrowth of a Biological Imperative 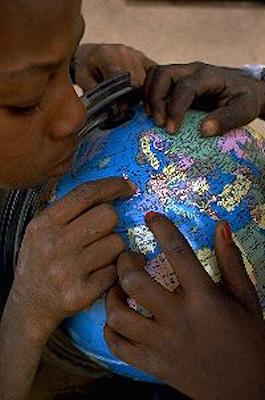 studying the Earth through the power of a globe

We are born to ask questions of the world. It is something every parent understands as they live through that magical time when their child begins to explore, to express interest in the world, and to talk. We are born curious – curiosity is a human biological imperative.

Science is an art form that provides an environment for curiosity to flourish and ultimately lead to understanding. It is also the only such art form that allows predictions to be made of fundamental ideas concerning the workings of the universe, and provides for the rigorous testing of those predictions.

Modeling enables science, and more generally, all human exploration. It’s as if the human brain is wired to create models in order for us to truly comprehend the greater universe and our own existence, and allow us to proceed through that existence in a way that is comfortable.

Not convinced? Look around you and see if you’ve immersed yourself in models. The globe of Earth on your desk, the map in your car, the doll in your daughter’s room, and the toy car in the playroom are obvious. But what about all the photographs of friends and family? They are models of the real thing. They are visualizations that allow you to see what you would have seen if you were looking at the real thing when those photos were taken. 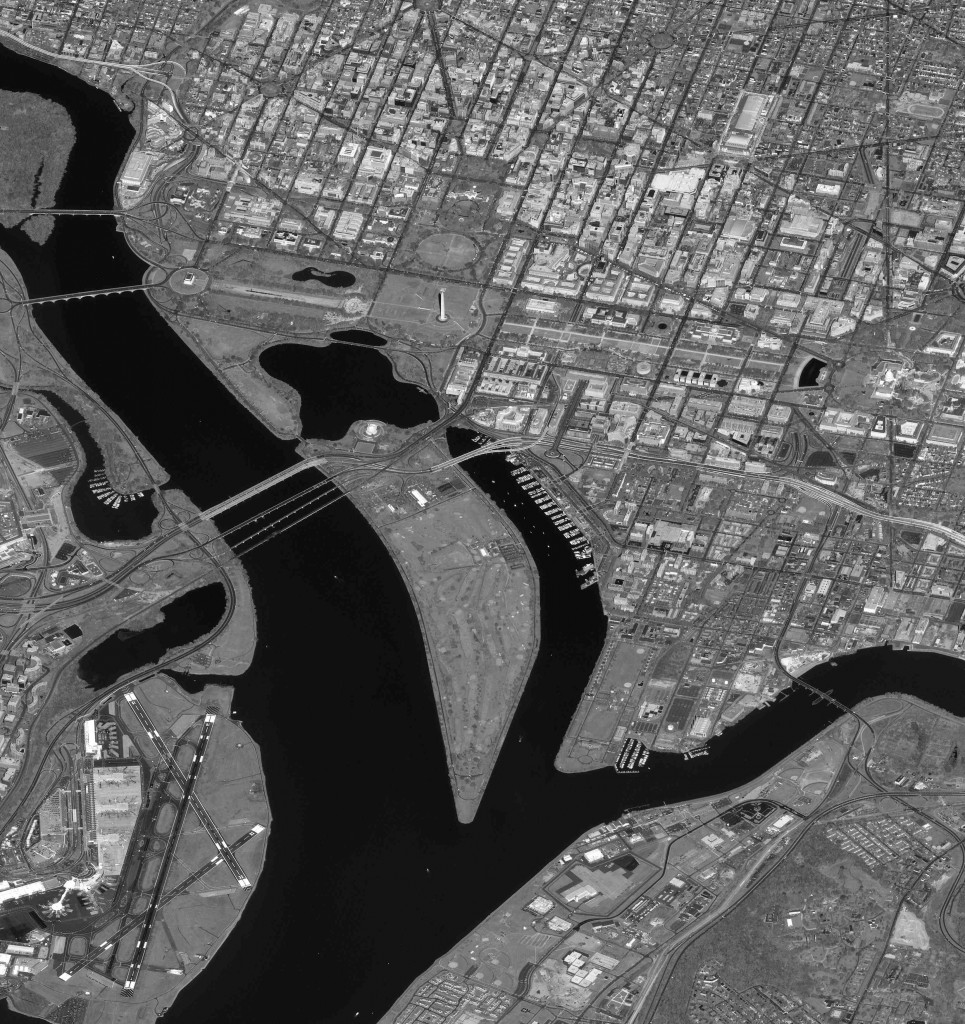 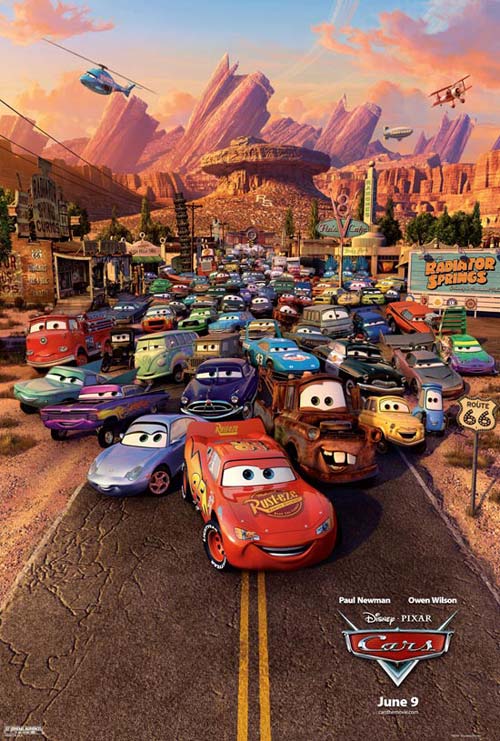 Your phone and your answering machine create synthesized models of voices and sounds of a distant place. Do you watch television? It provides digital models of unfolding events both fictitious and real. You might have even gone to the movies and seen a period piece set in some long gone era. The movie is as much a model as likely all the furniture, the clothes, and the streetscapes created at the director’s whim to help carry the believability of the story. How about the Saturday morning cartoons, and the movies from Pixar that you saw with your 3-year old? From the first frame through the credits, the whole movie is a computer-generated model of a world both recognizable and strange.

Now for your check book—it’s a spreadsheet, a mathematical model of the ebb and flow of your financial worth. The dollar bills and change in your pocket are conceptual models in a physical wrapper that can be used to purchase goods and services that have attached costs. And the cost of a service is a conceptual model of its net value.

But it doesn’t stop there. All of civilization is based on modeling, from the stock market, to economic forecasting, to weather forecasting, to databases for anything and everything that can be put in a database, to the equations that provide our understanding of the very laws of nature.

Maybe these last few paragraphs have even made an impression on you. I did it with words and a set of rules by which we string them together. The written word is an elegant, and complex model of what I would have said to you if we were in the room together. I’ll even go one further. Spoken language is the means by which we model our very thoughts, and impart those thoughts to others.

There are those things around us that are the very essence of reality. There are also those things around us that we have constructed both literally and figuratively to make the essence of reality comprehensible. If we surround ourselves with these models in order to make the familiar world livable, imagine their power for the explorer that is set to embark into the unknown. He or she might be an astrophysicist studying black hole physics using the equations of general relativity, an engineer developing carbon nanotube technologies based on a model of the carbon atom, a molecular biologist studying HIV using viral adaptation models, or a 10 year old in a science class studying flavors of atoms using the Periodic Table.

Models don’t make the world go round. But they do make it understandable.

model of a black hole 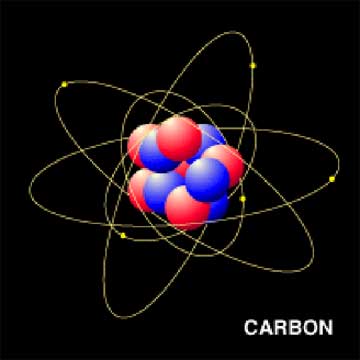 model of a carbon atom 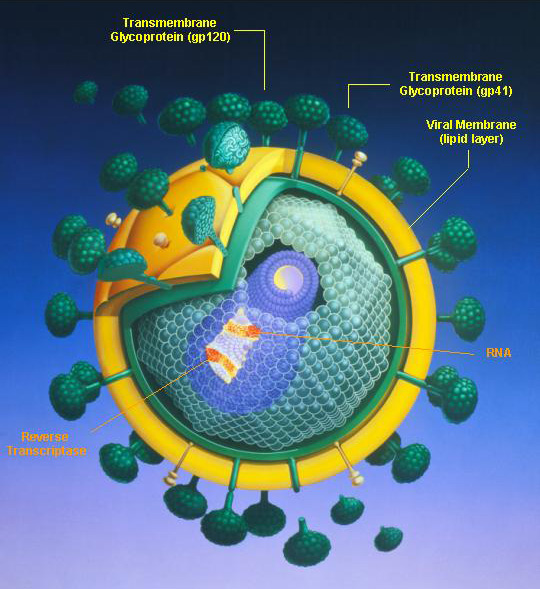 conceptual model for all elements in nature