Overview
Watertown, South Dakota is the state’s fifth largest city, offering many activities and historical sites without big-city crowds.  Visitors can explore the history of this “coteau” region at attractions such as the first Governor of South Dakota’s home, the Mellette House, the Codington County Heritage Museum or the newly restored Goss Opera House in the historical downtown district. Many folks come to experience the wide open spaces of the prairie, the vast wildlife of the area and Americana Art by Terry Redlin at the Terry Redlin Art Center. Watertown is host to one of only two zoos in South Dakota, the Bramble Park Zoo, certainly a destination not to miss.

Watertown is also home to Lake Area Technical College (LATC), one of the Nation’s leading two-year technical colleges and a recipient of the Aspen Prize for Community College Excellence. LATC is known for its wide array of academic programs and focus on STEM education and careers.

We envision the Voyage model Solar System to be a feature and a compliment to the Learning Center. As the primary feature of the park, Voyage will allow the theme ‘From the Prairie to the Stars’ to be made visible through the placement of the thirteen stanchions and accompanying trails. We want Voyage to provide educators and parents a tangible tool to discuss the vastness of our Solar System – something that is hard to do in the classroom and difficult for the developing student brain to visualize. Voyage will be an incredibly valuable teaching aid.

There are few things that can offer an experience of the enormity of space and our place in this magnificent universe. As the primary feature of Challenger Park, the Voyage Solar System will be such an experience as well as enhance this destination for tourists – adults and youngsters  alike. 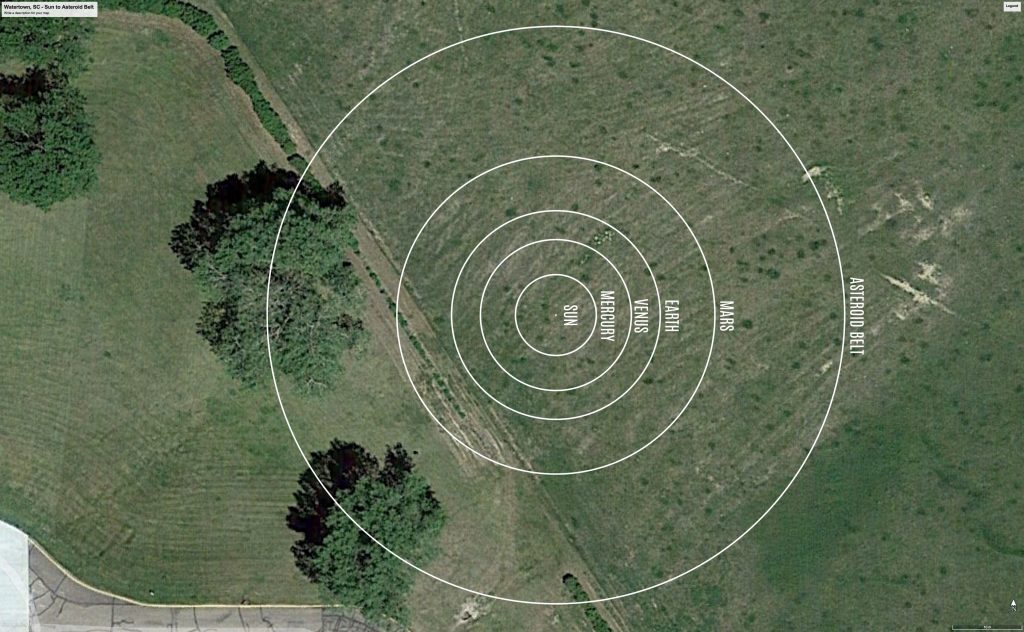 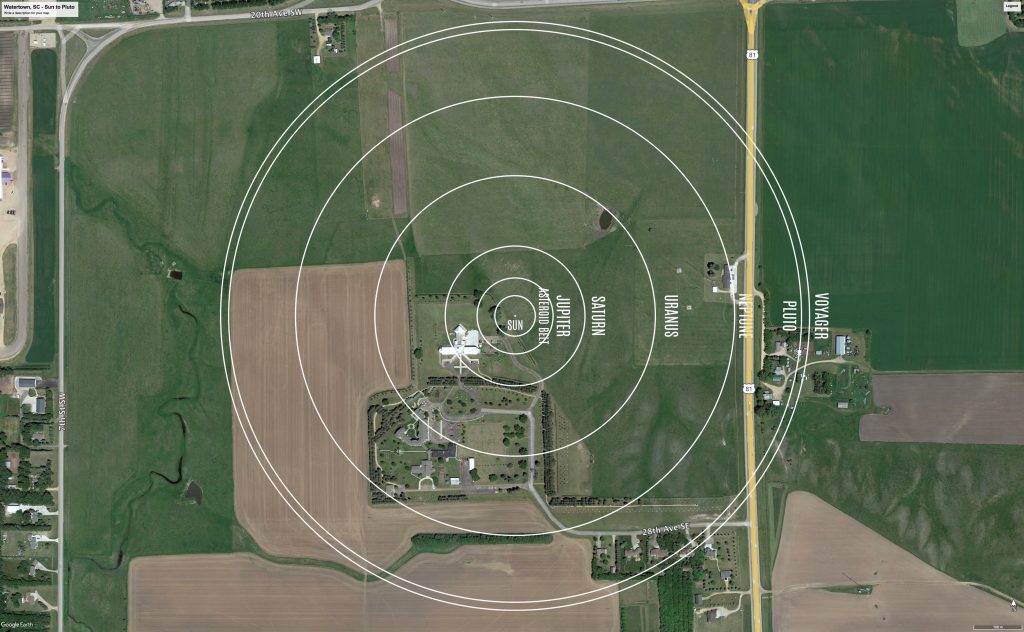 Note: since the site is an undeveloped field, no CAD map is needed. The FSMs accepted by the National Center for Earth and Space Science Education are the PSMs above with locations identified for the stanchions. 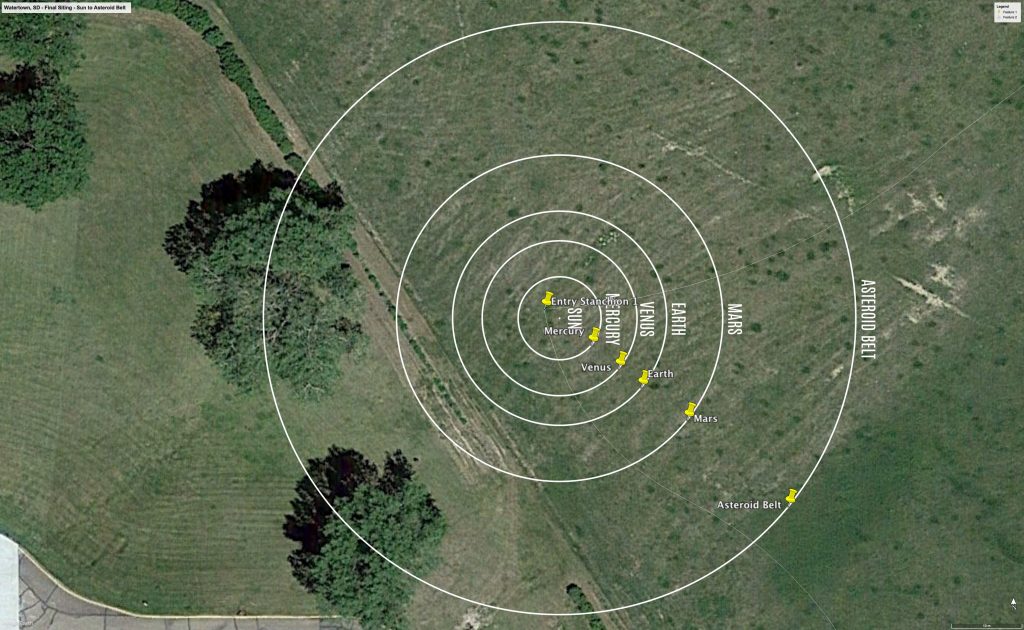 The Inner Solar System orbits out to the Asteroid Belt. The yellow push pins mark the future locations of the exhibition’s stanchions. 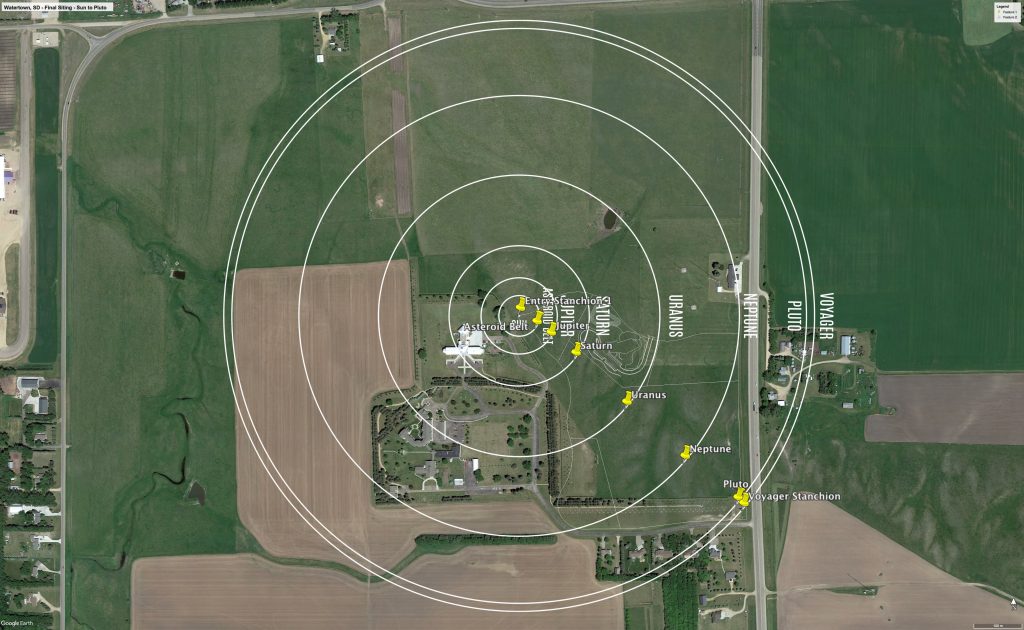 The Outer Solar System orbits from the Asteroid Belt out to Pluto. The yellow push pins mark the future locations of the exhibition’s stanchions.